With summer in full swing the only thing holding everyone back from planning anything substantial outdoors is the crazy weather we've had, particularly in a "double El Nino year" whatever that means.
The amount of precipitation thus far since spring really has been astronomical in relative terms with no end in sight at least through Canada Day which this year is celebrating 150 years. Traditionally and statistically we actually get hit with rain quite frequently on this day but we have to hope crazy wind flare ups don't hinder things either. 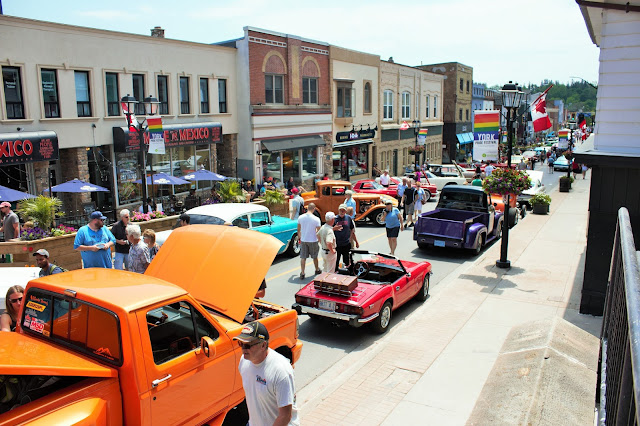 It's already affected the town of Newmarket's celebration early as flooded parkland and trail ways have rendered the usual location unsafe forcing the town to announce a new location this year at nearby Riverwalk Commons with events getting underway with the Lions Hall pancake breakfast still on schedule for a 7a.m. indoor start.

I recall a few years earlier when a sudden storm caused tables and chairs to overturn there while Jazz + music festival attendees scurried indoors as best they could to escape the torrential onslaught. Already this year it rained or threatened to throughout the town of Aurora's annual street festival likely affecting sales and attendance. Car show's too have had to cancel some major events already.

Now if you're an event organizer, vendor, promoter or band / crew member that relies on outdoor gigs to survive, it can wreak havoc on you as well, as witnessed by a recent washed out weekend long slated music festival that cancelled the rest of the show on the Saturday afternoon stiffing all the bands while doing so as well.

That event was doubly marred by the fact that it was charging a cover for the first time, combined with the torrential stormy weather, that sunk their ship and by the sounds of it the promoters were very much relying on that revenue to pay anyone. Wouldn't have been so bad if they'd explained it to the bands, like Elton Ron, that they had no $ but instead slunk away out of sight leaving a fuming wake in their / his dust and not returning calls or texts.

In Toronto, Ontario Place's Budweiser Stage is facing unprecedented flooding cancelling the first ever shows in the newly renovated spot hosting concerts for some big name acts....One wonders if this keeps up if outdoor shows become less and less common with simply too much money potentially being lost on so many levels. Insurance companies will increasingly be on the hook and with that a rise in ticket prices as well passed down to the little guy, you.Maybe places like the long running Cadillac lounge which recently announced it would be closing should hold out for awhile to cash in on a possible indoor insurgence.

Perhaps the new today needs to involve having a Plan B just in case the extreme weather fluctuations don't cooperate. Give us all a chance to do more home chores, after the storm nature walks, and indoor venue hopping. Let's just hope it doesn't progress to the point where Plan B becomes the new Plan A. That would blow.

Meantime, should you opt for a country or city drive, here's the listing links to the all G.T.A. Canada Day events in Ontario!