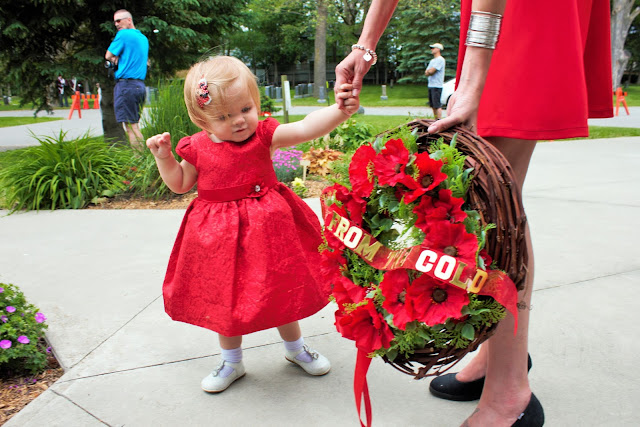 I am a bit ashamed to say I never, before Sunday past, really understood the significance of Decoration Day nor why it was separate from the more well known Remembrance Day which I've attended and covered much of in the past, and in fact even produced a one-off old variety style radio show live to the troops one year which featured many local talents including Sean Stephens (now CEO of Tree Frog Interactive), Hurricane Mike Thompson, and as I recall an excellent capela youth group sent from the now passed Merlene Samuel - Cephas' Spotlight Theatre school grads who sang more than O Canada live to the troops via our radio show! 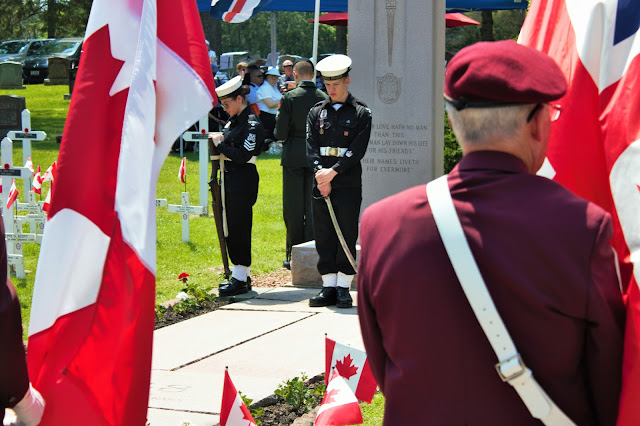 More recently I was involved in produce/directing a series of taped video interviews featuring prominent voices from Newmarket's history who have lived here for so many years, often with family who helped sjape the area including the daughter of the areas first police chief. But it was 93 year old Reg Harrison who stood out most to me, his face striking me as one that held so many experiences only someone going through the war from that era could know. Reg proudly came out to share with us in that interview with aid of a walker and enjoyed it too I think. So it was a great to see him once again as he took a spot to attend the 69th edition of the Newmarket's hosting of Decoration Day hosted by the Newmarket Vets Association. 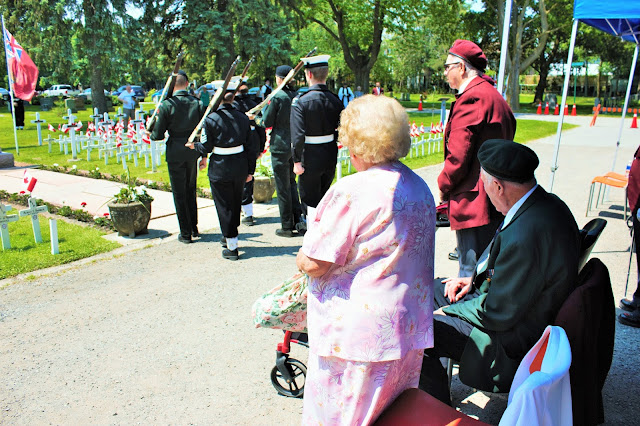 I had attended Decoration Day last year but still was unclear about it's true meaning until this year when asked if I would assist in laying a wreath in recognition of fallen and homeless soldiers, in solidarity with the local Inn From The Cold Shelter. Although I have no official connection to the Inn, I appreciated the inclusion, I guess having been recognized as a person who has worked towards making changes locally in areas that afflict the homeless and was honoured regardless to be asked to be part of such a tribute day. 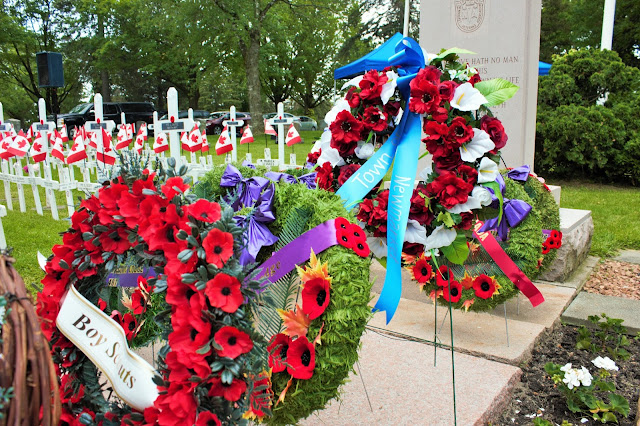 Ironically I have been actively working with the owner of a property just north of Green Lane in Sharon, Ontario to develop it into a unique, supportive home with built-in community and mental health supports and to that end have approached the Ontario office that assists adjusting and homeless veterans find suitable / affordable housing and supports to see if there would be a need - and indeed there is. Now using the working name of, the House of Hope, the property owner plans to be a hands-on operator and is excited at the prospect of it becoming a supportive home as its interior fixes come closer to being completed. Let's hope. Click here to follow its progress on Face Book. 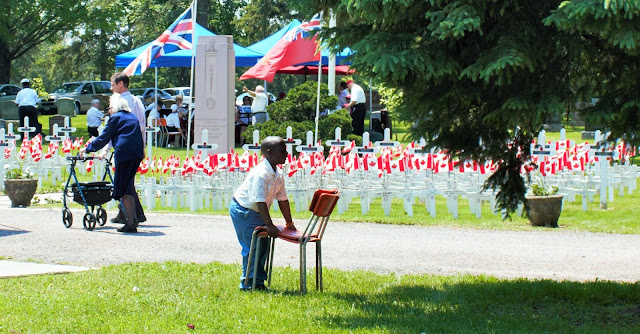 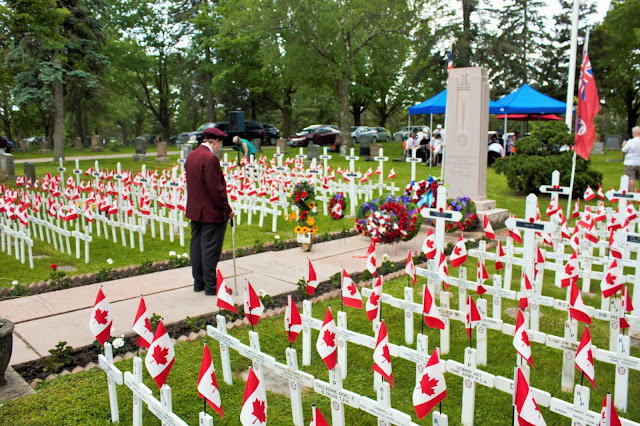 Originally started on June 2 1890, Decoration Day was started as sort of a protest in order to have fallen and wounded soldiers and their families recognized by the federal government of the times. In fact they were the very first Canadian led brigades to fight a foe, battling in Fort Erie repelling the Fenian raids which were made up of a mixture of anti-British Irish and American soldiers which included the Battle of Ridgeway in 1866. 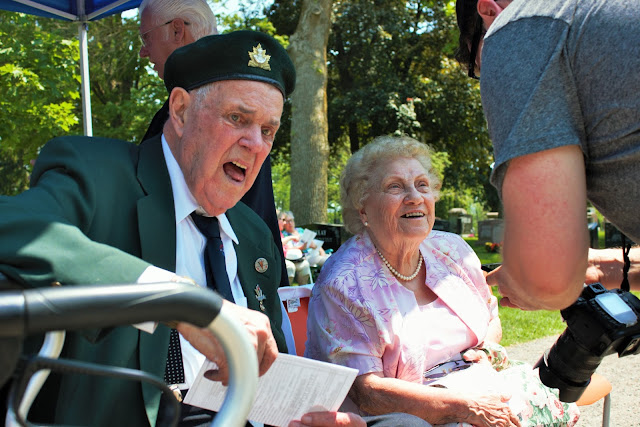 The hardships endured by those maimed and killed and then their families suddenly devoid of the breadwinner as well can only be imagined and was started by other soldiers themselves, dropping flowers at the Canadian Volunteers Monument at Queens Park, and has been kept up in recognition since - for the past 69 in Newmarket, Ontario, Canada where in 2017 the special guest speaker was the Ontario Housing Minister as well as homelessness fixer designate no less, Chris Ballard, who spoke in reminder of its meaning and asked us to imagine being their families. It was suitable an Ontario representative spoke as Ontario did give some recognition / support to those soldiers whereas the feds did not. 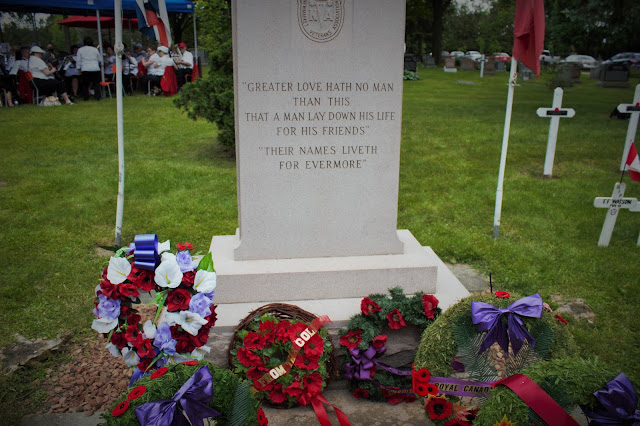 Interesting to see the young up and comers taking part but there's a world of difference today and one can only imagine the horrors guys like Reggie Harrison saw fighting to keep us safe and enabling the very lives we too often take for granted today. I caught Reggie once again as he and his son exited the Vets Hall, the Mayor holding the door for me as he exited and I prepared to enter. Reggie's son was carrying a street sign called Harrison Trail and with Mayor Van Bynen having just left it didn't take a rocket scientist. For once I agree with a street naming by a politician wholeheartedly.

" We can get one outside", his proud son replied.

And we did! You can catch Reg Harrison's full History Hound interview here as produced by TPE. 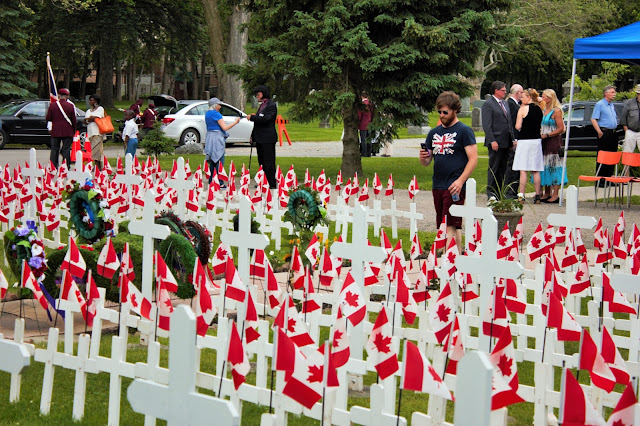 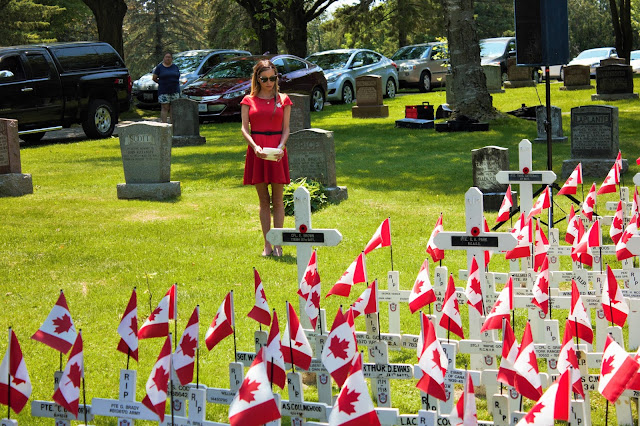