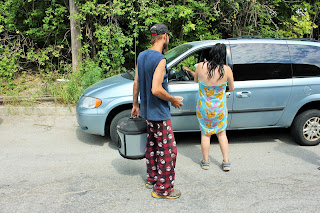 They say it takes a village to raise a child. Well let's hope they don't mean that literally. That was the worry of a York Region family to be, young mom pregnant with child and concerned dad to be trying his best to find a solution to them being homeless while retaining control of their and their baby to come's lives.

He'd come 'home" from working out west with good intentions, getting his Georgina girlfriend pregnant was a byproduct but just one his fathers spouse was not willing to also take on, so the couple and their cat found themselves suddenly homeless with her pregnant and them unable to stay anywhere but a forest after being turned away from a shelter. That's where I found them "arguing". In a location a stones throw from a busy plaza. 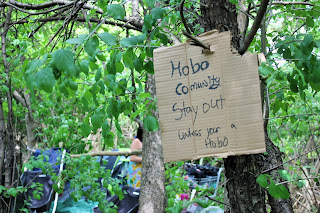 At first I couldn't make out the yelling I was hearing as I couldn't see who was talking but the brunt seemed being flung towards a 'homeless looking' from someone up the forest area and by the look at the guy's face his girlfriend. The guy stood half in and out of the tree grove while another woman stood half in and out of her car, standing in silence between outbursts from the forest and as I overheard a bit more, I offered that maybe I could be of assistance and told him a little about my self at which point the semi-standing lady, now fully out of her car, was addressing me,

" Oh, you're Jane. Hi!", I replied. Or something to that effect. The situation suddenly making sense.

" No way!" I heard from the forest, " I'm not going anywhere where they'll take my baby. And what about my cat. Nobody will take my cat!"

So with the nod of approval from 'dad' I waded in past a sign declaring " Hobo community. Hobos only!

" She made that", the young man offered, half reading my mind.

Then, in a subsequent discussing on the situation with the distraught mom to be and after I mentioned they would be eligible for emergency funds for food even if her spouse was waiting for a paycheque so they could eat....and which Ms. Haslam offered up she just happened to know exactly where the person from the Region who is the field worker to arrange this and where she was! So the plan became was she was going to go find her while I stayed and allayed and put out some calls for help. 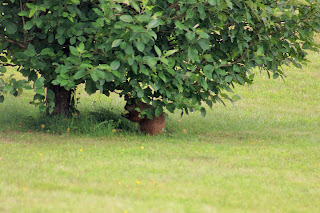 The temporary homeless compound they'd set up was complete with tent in a spot long used for those in the know, once the 'home" to a former gold glove boxing champ, John Fletcher who died an alcoholic and homeless in Newmarket in June of 2011. That little patch in the grove of trees had been his home for a number of years. going inside to couch surf or into a shelter when it got really cold.Surely we've learned lessons from john and others' deaths? This family to be deserved a better fate, two weeks in tropic-like hot temperatures with no shower access was plenty enough.

I let her know we'd find a place to take her cat temporarily - which Jane arranged as well - and that we'd get them into a shelter together today. Which was done - even a cab there, and all handled with dignity. As for the young man involved, I was very impressed by his resolve to be with her and stay by her side despite being ostracized by his own family for doing so. He also seemed resilient, although perhaps hungry.

The community workers hadn't been aware of this spot, although truth be known its seems more a stopover spot mostly these days, another on the fringe type guy showing up after their cab had left, his spot in the shade reserved for sipping his drink of choice in the hiddens of the foliage den.


Ironically I'd only wandered back there to kill time while awaiting a meeting to find new landlords for a home that assists those with addictions or mental health that was just up the street. When I returned from said meeting with ice caps, Elizabeth Pepin, Outreach worker for York Region, and Jane Haslam were also arriving - all the arrangements all ready wrapped up in a neat, dignified bow.

The cat sanctuary lady also showed up as it all went down and we thanked her for her efforts including getting free shots for the family feline.


Even a family of what appeared to be ground hogs, babies too, were wondering about in the compound, almost too close, perhaps used to being fed by humans. Whatever the case, the human ones have a much better chance now, and having been homeless, do indeed move up somewhat on the waiting list for assisted housing. 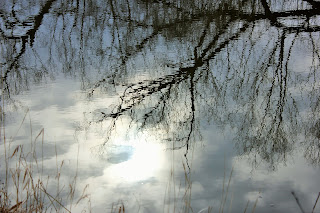 And so there it is the happy ending. ( Insert happy faces and hearts here) Back pats to all....

Always a but with me isn't there?

Here's my but. What happens in 6 weeks after their stay time in the shelter is up and they don't find a place they can yet afford? It's not like Y.R. is ripe full of rental housing, with one of the lowest per capita stock in the entire country. Does C.A.S. move in at that point and make a liar out of me, starting a "file' before the baby is even born to these two victims of circumstance?
\
But you said earlier it moved them up in priority on the waiting list for housing!

Yes I did, but moving up can mean going from 8 years to 4 years...who knows?

Is there anything that can be done about getting the Homeless in York region a higher priority on this waiting list?

Yes! Aside from the obvious of actually building more affordable housing, I believe actually it can be done simply through changing a YR housing policy which does not need governmental approval. York Region was once bound by a trade-off agreement with Toronto for some social services pooling dollars which we fought successfully to have returned. Remnants of that deal, which is accepting of G.T.A. residents awaiting housing or shelters on the same priority list as those who live in Y.R. and no priority to local residents.

This means that a person or family in Scarborough or even Ottawa can be ahead of a mother who lives or even grew up in YR yet we do not have the sane exchange of residents being placed into Toronto housing stock. There was a time when York Region housing was obligated to offer this, as funding had been tied to it, but with that no longer being the case, I see no benefit to York Region residents to continue such a system - and especially those who have lived and paid taxes and supported the communities for many years, hoping against hope, that one day they can live without fear of homelessness. All the housing help centres in the world won't help us if we have no where to place them into afterward.

"Shelters are not homes. They are part of the recycling system"