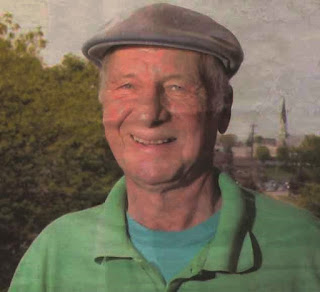 Few could spell his name, or even pronounce it right, but, make no mistake, Ivan Prokupchuk made a big mark on Newmarket before his death, Jan 27 2016 at age 77. He was beloved here.

In 1991 the former " Stringer"- having freelanced for 3 Toronto dailies and weeklies including the Globe & Mail, The Bradford Topic, The Newmarket Era, even Reader's Digest - wrote a self-published, Ontario-best-selling novel, Light Over Newmarket, still available on his blog online (he published 4 total). My mother, who once worked designing and selling ads for The Topic newspaper in Bradford, recalls Ivan walk to their office to submit stories from Newmarket.

Ivan never drove and walked everywhere, likely adding to early demise in the end, complications arising from varicose-vein leg problems. Last time mom, who lives in the same building he did, saw him out and about, he was coming back from Main St, and, upon reaching the walls, had to lean up against them for five minutes before carrying on. He was not one to suffer aloud. 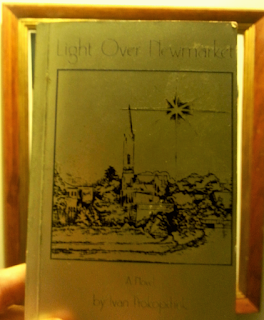 Some knew him as Old Ivan, but that wasn't always the case of course. In his heyday, the Ryerson University grad was a bit of a political rabble-rouser, known for his feisty exchanges with former Newmarket Mayor Ray Twinney, eventually exacting a sort of revenge when his nemesis was indicted on charges of embezzling the town. But Ivan had his vices too, like we all do, and demons, and was known to have a drink now and then, sometimes it getting the better. In the later years he'd slowed down somewhat in all departments, but he always offered to come out to help or speak on International Day For The Eradication of Poverty or perform at any worthy cause. He was not only a town and Main Street fixture and legend, but he was also also a guitar player and singer/composer who'd often come out to jams or gatherings and pick up a guitar if he could.

I knew Ivan by reputation only when I first moved back to Newmarket, having grown up in the area. But he was someone I'd respected from afar, reading his pointed pieces in newspapers, often having the gumption to go against the grain even when it might be a detriment to his career.

You don't meet many of those anymore. People made of that ilk of pure principle. It never stopped him from spending time as a teacher though, with stints at the Eaton School / Seneca College in King City as well as a for a number of scholarships in Mexico.


He was a man willing to take a position and fight for injustices should they arise as well, albeit with his pen. Eventually, feeling his messages were being muffled and voice not being made in the local papers - something I' can relate to - he started has own Newspaper through his publishing company, Island Grove Press, which he'd tried to move online in the past few years, this prolific writer of fact and sometimes fiction, just missing a social media age that would have played right into his hands. Never possessing the financial backing to take the news venture to the next level would likely be one of Ivan's regrets in life, that it never materialized to where he'd have liked. But he got to write about issues and give perspectives only an independent " Stringer"could give.


" That loneliness reached the level of a silent keen, the keen of a near-madman who realizes at last how vast a difference there is between the sane and the insane, between the sick and the well, that very difficult malfunction of very fine tuning that separates the genius from the madman or the enthusiast from the manic-depressive" Excerpt from Ivan Prokupchuk's novel Light Over Newmarket

To be truthful, much of what Ivan wrote, outside of news items, went right over my head, but he got me and my humour and unusual ways at times, right from the start. He not only recognised it but he genuinely appreciated it. And I could always count on a "like" from Ivan on things most people had no idea what the joke or issue was, but he did.

First time I met him in person, I was hosting "Wackyoke", which was something I invented that combined mature humour with karaoke, at a local pool hall slash nightclub . Having previously lived in the City I'd come across some place hosting "Crazy Karaoke" and mine was my sort of take on that theme but included impressions at times, with wacky stuff too - like if someone wasn't the greatest singer, I'd do funny stuff to go along with the song like back up vocals wearing a wig. Props, wigs, dolls, all kinds came out of the tickle trunk onstage, but conservative Newmarket had never seen anything interactive like this and it took a bit to get some on-board, but not Ivan, right away he saw how different it was, got it, and loved it, and relayed that to me. I found it odd at the time as he was so much older and I'd expected that reaction from mostly the younger set. That began our friendship I guess. 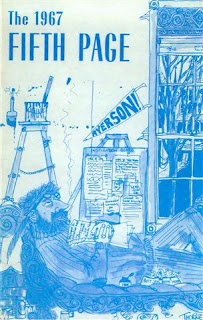 Like anyone I was shocked to hear he died, thinking his legs issue was not as serious as it obviously was. Ivan was proud, he certainly would not ask for help and would downplay health issues, so I wish I'd looked for the signs better and had a least one more chance to say good bye to my friend and let him know he wasn't forgotten and had made a difference with his life.

Although estranged from his family for some time, there is some solace in the fact his son was there at the end, but many friends who got to know him in their own intimate ways would like an opportunity to wish the mans spirit adieu I'm sure, and, to that end, there is a send-off , drop-in, Open-Mic Memorial being held for him Sat Feb 6, 2 - 4 pm at Roadhouse & Rose Funeral home on Main St Newmarket , giving opportunities to those wishing to express their feelings about Ivan through song or guitar or poems or speaking or any other way. We think he'd like that...Food and drinks will be available to if anyone wants a last drink "with" him.


See you at the party Ivan.