Produced by Culture Bridge Initiatives, The Culture Bridge Festival has been running in one form or another in Newmarket, Ontario, Canada since 2011 when it was held at the Newmarket Seniors Centre. Since those first days the cultural festival has grown in leaps, after some years of switching locations from Riverwalk Commons to the Magna Centre and back again, to its now more permanent home at Newmarket's beautiful Riverwalk Commons where not only can patrons enjoy the sights, sounds and foods of the world - but are within stones throw distance of historic downtown Newmarket and its own amazing array of multicultural restaurants and beautiful, historic buildings too!

From the beginning, Ranji and Leila Singh have been driving forces behind the growing festival and have done an incredible job of keeping it going, having to endure years of doing much of the "grunt" work themselves often with mostly volunteers to help organize and put on the annual festival. In fact the original foundation for the event was called the Ranji Singh Foundation. 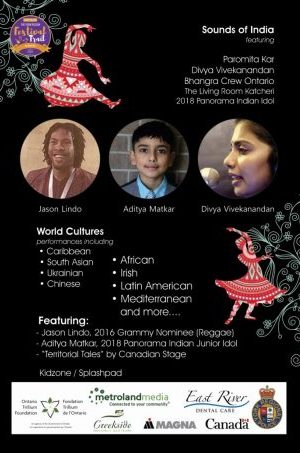 So one can expect an exciting array of international music and talent for 2018 including the sights and Sounds of India on day one at 4pm Sat July 14th alongside international food vendors and fun kids activities including everything from bouncy castles to learning / playing cricket, while on day two an array of international sights and sounds from 1-5 pm, including food, fashion, decor and performances showcasing the cultures of the Caribbean, South Asia, Ukraine, China, Africa, Latin America, Mediterranea, Ireland, Portugal and more...

Held inside and out at the Newmarket Lions Hall @ 200 Duncan Dr. ensures some respite from hot or wet weather should the need arise as well as a featured splash pad and fountain!

Local Notes: Free Parking can be accessed near the event, however for a scenic walk in and stress-free parking, park at Newmarket's municipal building at 395 Mulock Drive just west of the railroad tracks and walk the scenic pathway north through Fairy Lake Park and on in!