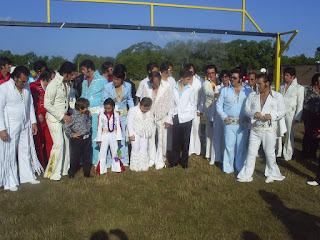 Are smaller live entertainment venues going by way of the dinosaur? It seems possible, based on the closures of so many G.T.A. live venues. Mainstays like Hugh's Room and even the El Mocambo, once untouchable, and where the Rolling Stones once played unannounced, are throwing in the towels it would seem and of course flagship never-a-cover, Gasworks, is long gone, as is Club Blue Note. Even Toronto's Hard Rock Cafe doesn't host live bands anymore while longtime venues like Yorkville's The Pilot and TO's The Silver Dollar are still around but are they thriving enough to resist the condo brigade from moving in on them too eventually?

A recent visit to another longtime Toronto live act venue, The Birchmount Tavern, saw a sparse crowd to take in often really good rockin' talent for no cover. If this is the support these performers are getting regularly it could be a death knell there as well. I do know a longtime sound and lighting guy is no longer an in-house luxury there, perhaps the first casualty of their live rock and roll war. Click here to check out TPE's video visit.


The owners of Toronto live act venue The Rock Pile - 2 locations - know the haydays of live bands, along with throngs of attendees, are gone, yet continue to run their venues anyway and you have to respect that. The former owners of the infamous 3 floor bar at Queens St W, The Big Bop, are theme oriented too and so a cool spot, with a good stage and plenty of seating for a show - but again, much of the onus is on the promoters to bring people in, as there is not a regular bar crowd per say. Each show being an independent one put on by the acts. Click here to check out TPE's visit to The Rock Pile.

Even in smaller towns that once sported live entertainment in almost every venue, it's getting harder to find bars featuring live acts, and certainly beyond just having just locals play. Even the venue operators these days seem to leave all the promo work to the bands, acts, and promoters making it even harder to get people out or aware. Often the venue will also "pay" you the door - that you have to man to collect - and perhaps a cut of sales which never seem to add up to much.


On New Year's Eve the event we promoted offered great, live ambient entertainment during dinner & later a DJ, a 5 course meal, bar inclusive at $75, and it was still tough to get people out! It certainly would have been both cheaper and easier using "canned" music but some appreciate live, and it's they who the eve was targeted. Click here to check out great live ambience highlights from New Year's.

Sure, we have internet means and Face Book to get the word out nowadays - but they don't always transform people from their seats at home to seats in the establishments. And these days they can get some video footage often from a show or event they are missing or missed.

That said, perhaps there are ways we can better use technology to entice bar and event / venue operators, to want to accommodate live music by perhaps additionally selling on-line live streaming to live shows using stationary in-house video cameras. Do it right, and this could be extra revenue streaming in potentially from around the world. They can set it up or promoters can and give them a cut, whatever works best in each case. Make it simple to tune in @ $5 a pop or monthly fees for unlimited live shows viewing. TPE currently records performances for perhaps future use or viewing on one of our on-line shows like I Really Am Tom, but I believe revenue from "attendees" not present could go a long way to supporting acts / venues to stay operating in the future.

Upcoming, there are a few live venue shows in the G.T.A. that I'm looking forward to, one being at the Horseshoe Tavern on Wed Feb 22, 2017 with The Marcus King Band featuring US guitar wunderkind Marcus King and the other being The Sixth Annual Aurora Winter Blues Festival, just north of the city along Yonge St., and running Feb 4, 24 ( Legendary Downchild Blues Band) & 25th 2017.... And keep checking in with TPE as we have some live shows in the works and live shows to announce and the Great Valentines Day give-away. TPE video clip AWB Festival past.

Stay in the loop on TPE Face Book.