Markham Farmer, Sam Orrico, who has been farming in the area 35 years, had been given until Sat May 14th to move or face having his remaining belongings destroyed including his home, now a trailer, after the original house burned down some years ago during a dispute on repairs raised by Sam who has an agreement for the property. Yet both the town and the property's new (and "powerful") owner seem to have teamed up to oust him prematurely, using a newly created and incomplete bylaw, designed for residential properties as it's launch pad vehicle.


Before that, it was April 29 2016, and before that Sept 14 2015, and before that pressure and threats he says. Farmers like Sam forge these entrance agreements so just this very thing does not happen. It clearly states he'd move upon approval for development and to date there is no such thing. 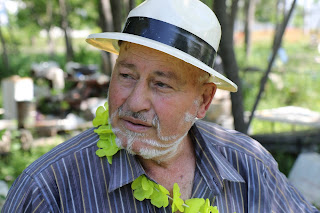 If you'd like to know more background follow this link, but in a nutshell the town has asked the property owners to 'clean up' the property in question, suddenly calling Sam's farming equipment, parts, signs, storage areas, etc junk with Markham Councilor Karen Rae even calling him a hoarder.

"I'm no hoarder", Sam barked, "That's insulting. A hoarder hoards things they don't need. I need these things to farm and for equipment maintenance and many things. People who are not farmers do not know." He was offended. Even more so than back in Sept 2015 when the property owners reps first "ordered" him out, to have his stuff gone or they'd remove it, and then sent 7 cops to take him away in hand cuffs to prove they meant it - despite having his agreement. He came back that next day, after a humiliating stop for an "assessment". But belongings were now missing.


Sam issues his own letters! 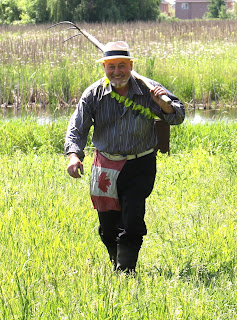 Well Sam has sent a letter of notice of his own this week to the police, council, lawyers for the property, the property owners, you name it, letting everyone know he will no longer accept letters from anyone unless it's from a court of law. That he disputes their claims, and has an agreement as proof of his claims, and means to have his day in court.

He's been treated terribly for years with just enough interference by both the city and the land owner, he claims, to keep him from becoming a viable business. But it's more like disappearing lately, as equipment's has gone missing, farming tools, generators, even in the last few days the bolts to his trailer wheel chassis have gone and even his dug in flower perennials. They also expected him to move everything on their timetable at his own expense.


Yet, they, for some reason, have no problem moving in some other fellow in at the back of the property into another trailer over a year ago now, who Sam says he's just there to spy on him and cause grief, yet for some reason they need Sam out - before this property is even zoned for development - or rather re-zoned as the property owners and city are hoping for smooth sailing to condo development, superseding the official plan which called for industrial, being near the highway. Gridlock.


I'm afraid they've all misjudged this old man of principle with a rock solid contract to be there.