York Region gets into swing of Pan Am Torchbearing 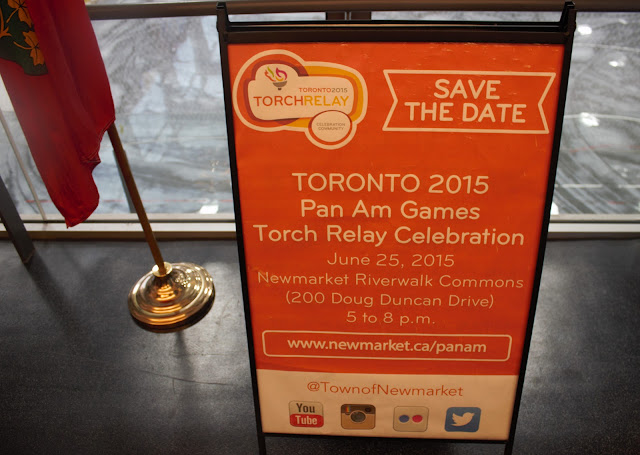 With the Pan Am Games just around the corner, an event that with over 7,000 athletes participating, which will be Canada's largest ever sports games, watch for the torch relay celebrations coming through your York Region Ontario neighbourhood, June 25 or 26. 25th if in Aurora / Newmarket!

With each area seemingly being allotted a number of appointees with no specific criteria for picks made by the various politicians - such as the Mayor's / town's picks - it was a breathe of fresh air to see M.P.P. Chris Ballard choose someone that not only deserved it, but has no politcal attachment whatsoever other than recognising and rewarding community development work.

People that follow my blogs know I'm not a fan of political parties, but believe more in the individual person in each post, willing to work with any party, just hoping to communicate on a person to person level, which is not always achievable. And it was I who connected the two, but not for amorous reasons. No, we'd made a visit to the M.P.P. because Dan was tired of going hungry each month or having to ask for stuff or having to choose between food or clothing or......

So it wasn't a social visit per say, but it did end with the promise from the Newmarket Aurora M.P.P. to consider what he'd said, and a promise to help him apply for special shoes, which, on the street, cost about $1600 and take months to make, a request we hadn't prompted.

Later, when the nominations for torch bearing came up, they asked me if Dan might be interested to be one, and the rest is history, with his assigned route running on Bayview Ave in Newmarket Ontario starting at Penrose Avenue at 6:30 pm and snaking on past Pickering College. Before that, there will also be a home base party going on at 200 Doug Duncan, the Newmarket Community Centre.

Frankly, in all the years that P.A.C.C. had been involved in the community, Ballard was the first to really directly acknowledge the good work of P.A.C.C., in a way, through awarding Vice-Chair Dan this opportunity, based on his previous commitment to the community mostly through P.A.C.C.. Frank Klees certainly never would have done that, although, at the end of his reign, his assistant did come over personally and shovel his driveway, in heels no less when the local volunteer service kept passing him by a few years back, likely for daring criticize. Now that was impressive.

Of course none of that is possible for him now, his disability increasing with each year - when I first met him he could almost do his lawn unassisted, now he has a hard time drinking from a big cup, and so this will be a moment I'm sure he'll cherish, despite the looming hardships. Thank goodness for the Highway 11 Cruisers who include him as a member despite not being able to drive anymore so at least he can enjoy them.


All this hasn't changed Dan's resolve to negotiate a better deal for those like him on disability support though, in fact on Tues July 7 2015, Dan holds his own torch bearing of a sort, his Stroll and Roll to Freedom event which invites anyone who cares to come along, to come stroll, roll, and whatever, from York Region headquarters to M.P.P. Chris Ballard's office, asking that he and those in similar positions as himself, unable to earn extra income, deserve a better deal than the 1% raise proposed when the rates already lack from the Harris years still as successive Liberal governments have never returned them to liveable levels...and a man having to live in socks is enough of a testimony to that methinks.

So yea, kudos to M.P.P. Ballard for having the, dare I say, balls, to reward someone despite them having a differing opinion officially on one issue at least, although the M.P.P. did agree at the time that he did deserve a better deal.

As yet P.A.C.C. has not been offered any tickets to the events by the Pan Am Games people, so I don't know that any grassroots group whose mandate is specific to poverty reduction will be attending but it is an event one would hope made accessible to our vulnerable youth and residents.

P.A.C.C. resists grant dollars and relies on goodwill mostly to survive, believing that groups out of the pay loop, are more inclined to stay true to their goals, and not concentrate on fitting into funding models, a lesson heard
some time ago by one of the most successful advocacy groups ever assembled - managing to get it mandatory on subways and transit for out loud stop announcements for the blind!

Now that's real change that made a real difference.

Until next time.. Go Dan Go!