Christmas came and went, then New Year's and for most of Canada life carried on as it had previously, with most of us convinced we'd done our part during the festive season giving to our loved ones and to the "poor".

But for some, there is no back to normal. For some a life of misery, at least for the foreseeable future, remains. Like the now senior farmer who tires from fighting just to have land to "farm" and now lives alone in a trailer with off the grid heat.

But so too do some youth struggle to survive in this often unforgiving society that seems to more easily accept a sentence of homelessness to males.

In a sort of reverse way our system often seems to, unwittingly perhaps through past patriarchal thinking, give less treatment and attention to men's and boys issues. One needs look only at the programs and services available. For example, there is no "men's centre" - yet a long established women's centre - and shelter beds available to women outnumber the men over 3 to 1 yet men and males make up the bulk of the actual street homeless.There are also 0 transitional houses for men yet we have units for women.

In fact, a 2017 Toronto / York Region United Way survey found a full 100% of York Region's street homeless without any supports whatsoever were male. Compile that with studies showing males commit  suicide in 80% of all cases and one wonders why a crisis has not been declared and political champions not speaking out outraged? #Mentoo ? 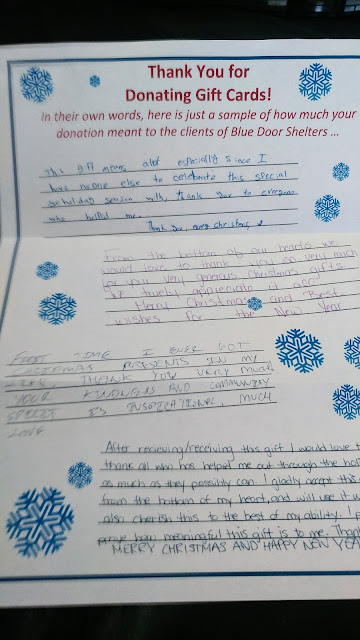 Our outdated social safety net system seems to regard these men as expendable? Indeed they are from my experience often simply given bus tickets to take them somewhere else, like Toronto, where last year over 70 men - over 90% - were found to have died (decades) early as a result of having lived on the streets, as of only November. No inquiry? And we cannot be so naive as to think York Region men aren't part of those death statistics when our lone full time York Region's men's shelter of 26 beds is full 100% of the time. Ditto its 12 bed youth shelter in Newmarket, Ontario, Canada.

So, as we all continue on and pat each other on the back about what a great job we're doing, maybe just stop a minute and take a good look, and if in conscience you can say we are, then so be it. More men will simply die. Are these men deserving of programs and homes? You decide.

Pictured is a sample of "thank-yous" sent out after a donation for presents to a York Region male youth shelter over Christmas of 2017 and donated by a local business, Stellar Car Wash.

Editors note: One person had never had an Xmas present before.
By Tpeproductions - February 06, 2018