With the Federal election in motion YOURK NEWS was invited to the kick off campaign for a local NDP Candidate, Yvonne Kelly, candidate for Newmarket - Aurora. Truth be known, I know this candidate quite well and know she's no fly-by-nighter... and she is a devoted NDPer.

I got to know Yvonne while she worked for the York Region Food Network, a group devoted to finding better solutions to food insecurity issues. They were not food bank fans and that was a connection we had in common to start.

At that time, PACC , which I chaired, was quite involved in various local poverty related missions, and through that had worked on some collaborative committees and in some action groups together, including York Region's only ever social audit 'Behind the Masks" from which we both co-tabled a report that we presented to York Region Council, which then officially accepted the work that took us 6 months to complete and included the largest collaboration of its kind in the region ever, and then passed it's recommendations on to Queen's Park. One can only surmise that's where it sits today. 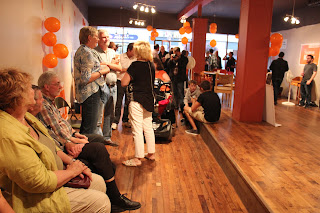 At any rate, I did come to respect her knowledge on issues, even if we didn't always see eye to eye, but Yvonne was always willing to work with others and listen to other viewpoints - some grassroots input - and recognised the value in it often. So, at least in my eyes, this candidate knows real issues on a real work - not volunteering - prospective, and understands all the political aspects of the issues as well including our history and the intricacies of how parliament works and I've witnessed her work ethic and impressive attention to detail.

I certainly don't endorse any party as I have always been one to pick someone I think I could best influence and who seems genuine. Someone who would listen and perhaps be swayed with the right argument or be close to my own...and she may be it.

The parties, to me, are not far apart from each other as far as policies go, so to me the choice may indeed come down to who I think has the most integrity and trustworthy to best represent my ideals and hear my concerns. what about you? How will you decide?

This video interview with NDP Federal candidate Yvonne Kelly ends with a spoof that sums up my feelings on elections!
By Tpeproductions - September 11, 2015